The Oldest Temple of God of Wealth in Taiwan

5.The Oldest Temple of God of Wealth in Taiwan

The area of where Nankan Wufu Temple is located, were the earliest developed regions in Taoyuan due to the transportation advantage of Nankan River. The Nankan Wufu Temple inherited the kinship of Xuan Tan Marshal God which brought by the troops of General Koxinga of Ming Dynasty and was the oldest temple constructed in Taoyuan City as well as formed the religious sphere of the major five villages of Nankan. The Heaven Furnace (stone furnace) left from the Taoist sacrificial ceremony (a ritual held to thank the Taoist Gods after the extension or refurnish of the temples) in the 3rd year of Daoguang Emperor of Qing Dynasty (1823) not only witnessed the construction history of Wufu Temple, but also became the major mascot of the Temple since it is said that the blessing from Gods would be delivered to the one who touches the Furnace. 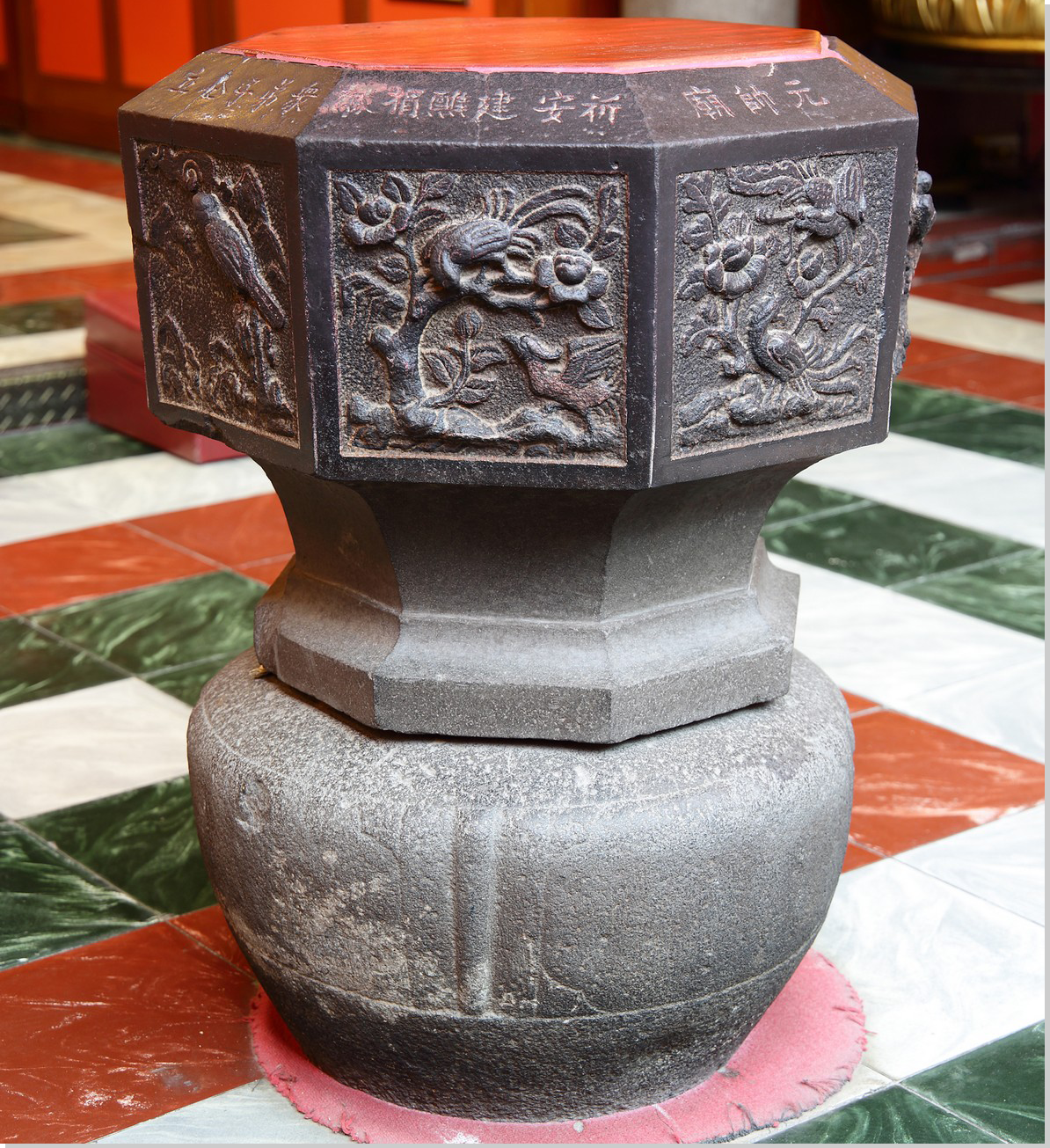 Nankan Wufu Temple majorly worships Xuan Tan Marshal God of Wealth, Tzao, Kung-ming, and is one of the religious beliefs centers of Lu-zhu, Gue-shan and Da-yuan Districts. Legend has it that in the 13th year of Yongli of Ming Dynasty (1661), General Koxinga came shore to Taiwan and prayed for the protection of Xuan Tan Marshal, he then attacked Fort Provintia in Tainan in December, 1661, came ashore to Nankan Port in Spring, 1662 and stationed the troops at the mountainside of Mount Hutou (the current location of Wufu Temple). Tables and relics were placed under the camphor trees and worshiped the kinship of Xuan Tan Marshal, which later became the origins of the establishment of Wufu Temple in the 36th year of Yongli of Ming Dynasty (1682). Wufu Temple became religious sphere of the major five villages (Ding-chuang, Xia-chuang, Miao-ko, Luzhu-tsuo and Kan-zhi) of Nankan, in the major refurnish in the 15th year of Taisho era of Japanese colonization period (1924), the renowned carpenter master Chen, Yin-bing (1864-1944) and his excellent apprentice Liao, Shih-chen (1899-1985) and Master Tsai, Wan-ching’s student, Shui, Chin (dates of birth and death unknown) managed to refurnish the Temple separately, which completed one of the most famous religious architecture works with different designs in Taiwan. The stone statues, paintings, ceramics cutting and pasting and koji pottery are also made by artistic masters, and currently, the Temple is the the Taoyuan City Government designated historical spot. 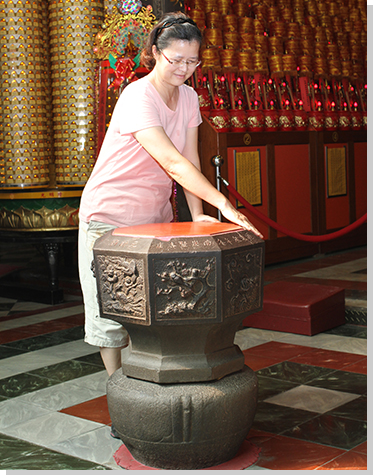 A.Major Mascot of the Temple- The Heaven Furnace:

The major mascot of Nankan Wufu Temple is the Heaven Furnace (stone furnace) left from the Taoist sacrificial ceremony (a ritual held to thank the Taoist Gods after the extension or refurnish of the temples) in the 3rd year of Daoguang Emperor of Qing Dynasty (1823). On its surface the texts “In the winter of the 3rd year of Daoguang Emperor, all villages of Nankan cooperated to build the Temple, these words are recorded in memories of the ceremony.” are carved, which have a history of 200 years. The design of the Heaven Furnace is different from other conventional furnaces, on top it has a shape of octagon, decorated with carved flora and animals, the bottom is the column with a diameter of 57 cm, a height of 80 cm and a total weight of 120 kg. The local residents believe the good fortune would be delivered by touching the Furnace, so most of the worshippers come to the Temple would touch around the Furnace three times clockwise and make wishes. In the early moments, the Furnace was stored in the warehouse due to the refurnish of the Temple, and was move to the front of the Main Hall for exhibition after being discovered by local seniors. 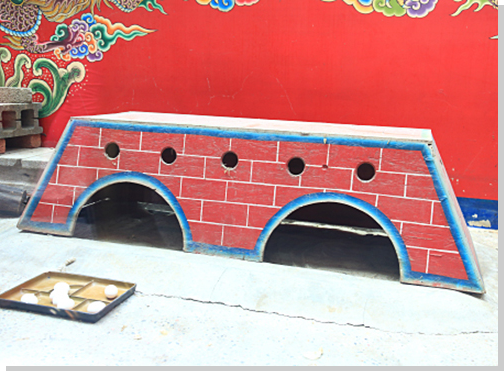 Nankan Wufu Temple is the only Temple in Taiwan that raises snakes and has the Caves of Messenger Snakes behind the Temple. Legend has it that there were banyan trees growing near the troops camps where the Temple was located, the divine snake resided in the thatch temple with regular life routine, which was viewed as the messenger of Gods by people. Though the divine snake did not hurt anybody, in order not to panic the worshippers, the Caves of Messenger Snakes were built after the reconstruction of the Rear Hall of the Temple. The eggs used for feeding the Messenger Snakes are all donated by the worshippers.

Besides the wooden sculptures by Liao, Shih-chen, Shui, Chin and Huang, Gue-li (1903-1995), for the traditional decorations in the traditional architecture of Nankan Wufu Temple, the koji pottery works in the Temple can also attract the eyes of the professionals. The Dragon and Tiger Walls on the right and left sides of the Mina Hall were made by the koji pottery master Su, Yang-sui from Quanzhou in the 14th year of Taisho era of Japanese colonization period (1925). They are not only one of the rare works by Su, Yang-sui preserved in Taiwan, but also one of the invaluable precious of Wufu Temple as well as the artistic treasure of Taiwan.

The Sacred Sign Pavilion of Nankan Wufu Temple was constructed in the 5th year of Tongzhi Emperor of Qing Dynasty (1866) for the use of written words, funeral oration and ritual vessels incineration. It was first established near the archway, then moved to the park near the furnace on the left of the Temple in 2005 in order to avoid car crash. The two layers of the Pavilion are built with red bricks and the edges of each layer are decorated with figures of sacred beasts as dragons and phoenix, on the top the two words “Sacred Sign” are carved, and on the side of the Pavilion a stone tablet is placed to record the history and the donations from the society. 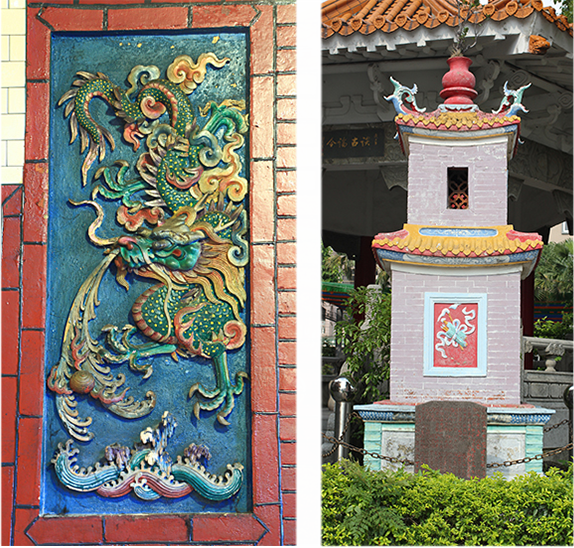 The biggest ceremony of Nankan Wufu Temple is the “Cultural Festival of Military God of Wealth” on March 15 and 16 of the Lunar Calendar that celebrates the birth of Xuan Tan Marshal. Folk temple activities from every part in Taiwan such as parade, family plays, Bei-guan music and Ba-jia-jiang plays all get together to join such lively religious ritual.

24/7 for the whole year for the guidance