4.Daxi Lianzuo Mountain Guanyin Temple- The Rare Temple with Layout of Five Gates and One Hall

Lianzuo Mountain Guanyin Temple is one of the rare Taoism religious architectures with single entry (straight ahead) in diagram and worship pavilion in front of the Main Hall. Though the Temple has been through numerous reconstructions, the Temple was almost torn down then reconstructed, which preserved most of the precious wooden and stone components from Qing Dynasty. Besides worshipping Guanyin majorly, the Temple also worships Sanguan Three Official Gods- the unique religious belief of Guangdong immigrants, so the population of worshippers includes Minnan people at Daxi and residents of Hakka at Taoyuan, Miaoli and Hsinchu. It is said that the Temple was initially built under the cooperation of Minnan and Guangdong people, under the background that Minnan and Guangdong people often came to conflict and brutal fight, the religious belief ecosystem of Lianzuo Mountain Guanyin Temple has sufficiently represented the competition and cooperation of Taiwan peoples during the pioneering times. 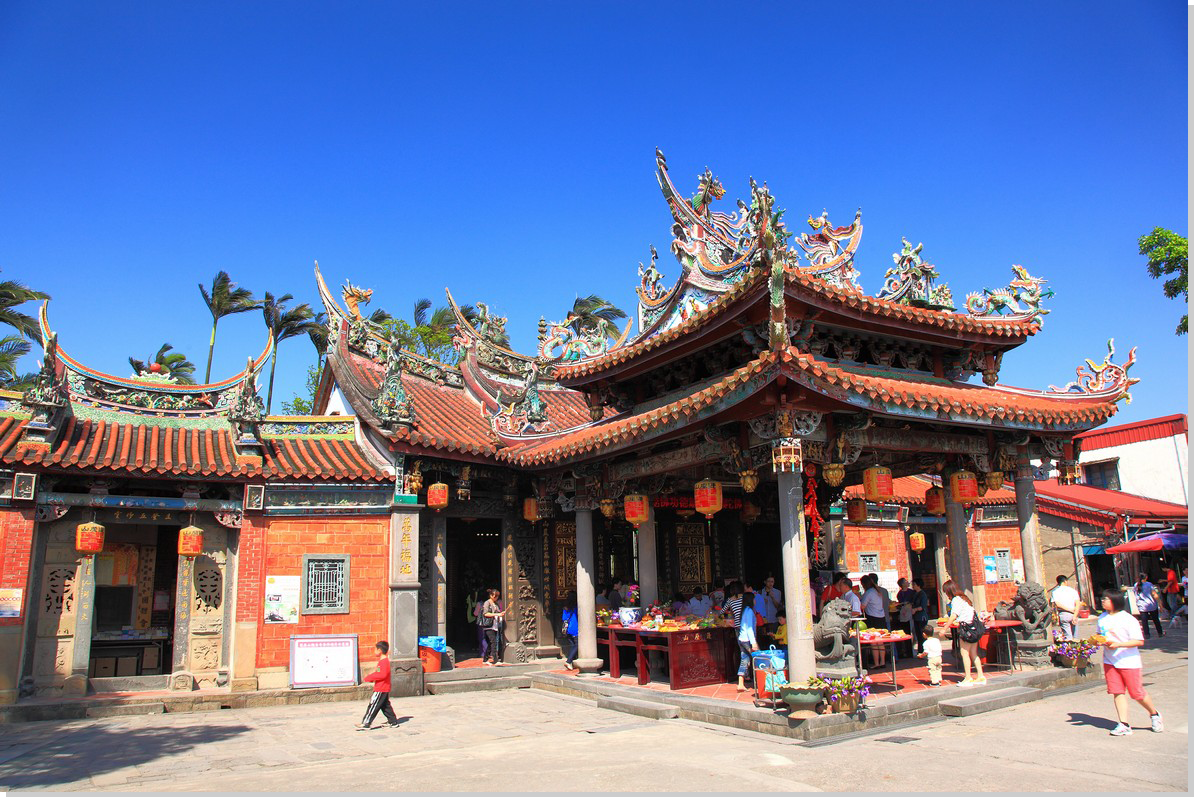 Daxi Lianzuo Mountain Guanyin Temple was located near Kanjin Bridge and got its name because the mountain landscape is like the lotus flower just rose from Taoyuan, Miaoli and Hsinchu, in the 2nd year of Jiaqing Emperor of Qing Dynasty, the local gentries witnessed such landscape wonder and funded to build the Temple at the mountain top to worship Guanyin. During the eras of Daoguang Emperor, Xianfeng Emperor and Guangxu Emperor of Qing Dynasty, the Temple had gone numerous construction, and the Temple was extended and gained solemn atmosphere, the last reconstruction was conducted in 1988, currently, it has been recovered to its early outlook and is the Taoyuan City Government designated historical spot. For the past 200 years, Lianzuo Mountain Guanyin Temple has become one of the religious beliefs centers of Taoyuan, Miaoli and Hsinchu, and there is the custom of inviting the “kinship flag” (the flag that representing the power of God generals and soldiers) back to household. On February 19 of the Lunar Calendar of each year is the Birth of Guanyin, where the worshippers from every place come. People can enjoy the beautiful scenery at the front plaza of the Temple which is categorized as “Dawn of Bell of Temple”, one of the 8 scenery of Daxi. 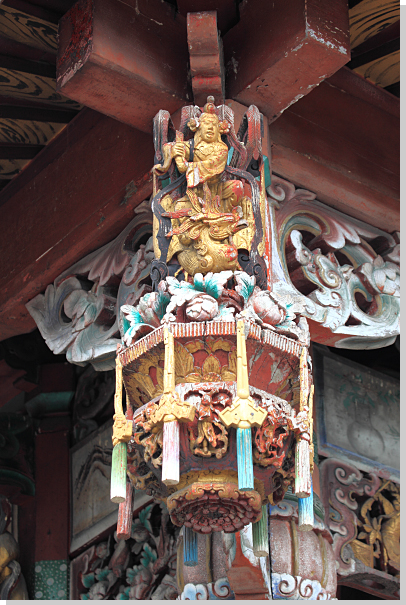 A.Architecture with Layout of “Straight Ahead”:

popular Lianzuo Mountain Guanyin Temple adopts the architecture layout as “Straight Ahead” as constructed in one straight line horizontally due to the geographic limit of insufficient range of straight depth. In the reconstruction conducted in the 9th year of Showa era of Japanese colonization (1934), the Temple was rebuilt as the layout of five gates and one hall, but maintained the specification of single entry (Straight Ahead), some of the components of the interior of the Temple were moved and the roof of the Main Hall was reconstructed as the style of “San-Chuan”, transforming the Guanyin Temple from a small-scale simple and unadorned temple into a middle size one with nine open rooms with five gates.

The architecture with layout of “Straight Ahead” of Lianzuo Mountain Guanyin Temple and the Worship Pavilion in front of the Main Hall form the rare layout and specification of “single entry temple with “San-Chuan” style and pavilion in front of the hall”. The East Asian style of double hip-and-gable roof (which means placing another roof on top of the original one that is at the slopes of four corners to represent the noble and elegant character), which the general worshippers often call it “Guanyin Pavilion” to express their respect. The Pavilion was initially built in the 37th year of Meiji era of Japanese colonization (1904), and the original tetragon pavilion was replaced by the octagon double hip-and-gable roof during the reconstruction conducted in the 9th year of Showa era of Japanese colonization (1934). There is one stone lions at both front sides of the Pavilion which are painted beautifully and pretty suitable for decoration, the ancient fairy hanging baskets were also the works during the reconstruction in Japanese colonization era. 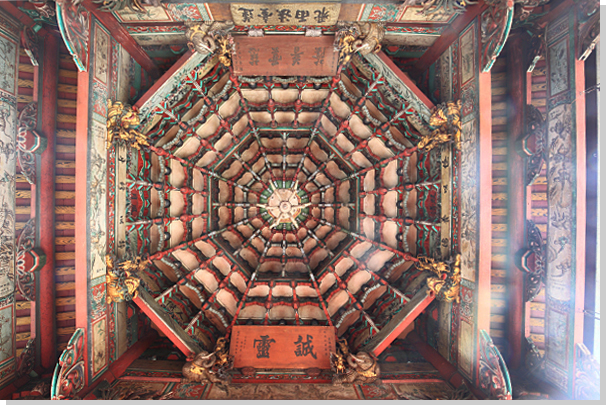 There is a rare “Octagon Caisson” at the top of the Worship Pavilion, it was initially built by putting octagon wooden materials at the square beams. 24 sets of Dougong (wooden brackets) were extended upward from the interior, after three rounds, the 16 sets of Dongong would be placed to the center with another 3 rounds, then complete the rounding at the center of the Bagua symbol, making the Dougong equally distributed at the beams and support the extended eaves. It shall be noted that the 8 corners at the second round adopted Chi Tiger Bracket thaqt circled back, which was the common construction approsaach adopted by carpenters from Zhangzou during Guangxu Emperor era of Qing Dynasty.

The Sacred Pavilion of Lianzuo Mountain, which locates at the spot more than 10 meters away from the right side Temple, could not be traced back to when it was built. Legend has it that it was built roughly at the same period of construction of Guanyin Temple, it was then rebuilt in the 11th year of Showa era of Japanese colonization (1936), which was roughly at the same time as the one of the Sacred Sign Pavilion near Renhai Temple at Chungli urban area, and both of them had portrayed the unique and different Western and Eastern styles. The Sacred Pavilion of Lianzuo Mountain is preserved in good shape; its structural design is the hollow square column and divided into three levels from top to bottom combined with red bricks with height of 5 meters. The roof of the Pavilion adopts the design of East Asian style of double hip-and-gable roof, on top of the level the words of horizontal scroll of “Kuei Shin Lou” are written, and worships Wenchang Dijun, the God that manages literature and examinations, and the Guardian God of students, Kuei Shin, is also placed in the level; the roaring dragons and tigers on the surface of the Pavilion are vivid, and the couplet at both sides decorated with birds and loctus, “The rich literacy is shown under this Pavilion, and the light of literature is express through stars” is written. The three words “Words Respect Pavilion” is written at the central entrance of the furnace which the ancestors used for incinerating written words, at the base of the Pavilion, the fences of Bagua layout are built. 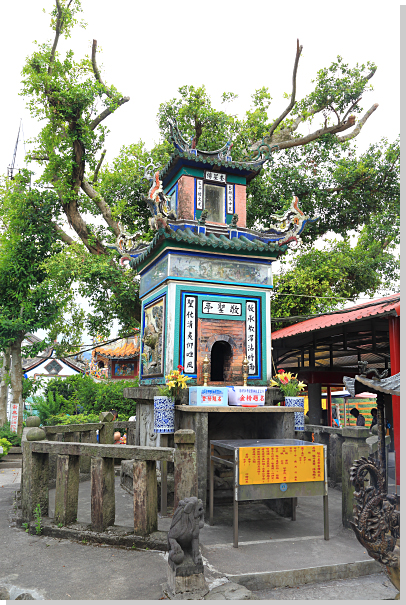 The ancient stone lions from Xianfeng Era are placed at the entries of the Temple, the style is simple and unadorned and sculpted powerfully, the lions were moved to the current location to greet the worshippers. 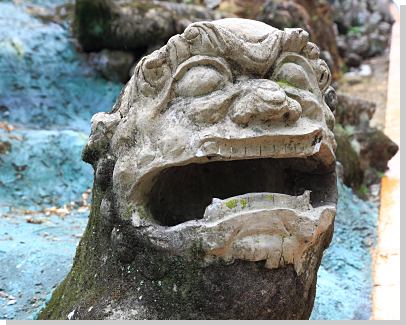 Before February 19 of Lunar Calendar of each year, the Birth of Guanyin, worshippers from every place and Hakka communities all come to participate the ceremony and remember their ancestors, which is the annual big event of Lianzuo Mountain Guanyin Temple.

Open Dates:24/7 for the whole year for the guidance, the Guanyin Festival is from January 1 to February 19, on June 19 and September 19 of the Lunar Calendar