3.Daxi Zhai-ming Monastery- The only temple that preserves the copy of “Chinese Buddhist Canon” from the Song Dynasty

Daxi Zhai-ming Monastery is originated from Long-hua school from the Chinese religions of fasting, for the past 160 years, it has reflected the progress of gradually declined Chinese religions of fasting in Taiwan and its transformation to Buddhism style. There are abundant collections of antiques and cultural relics in the Temple, and among them, the only copy of “Chinese Buddhist Canon” from the Song Dynasty in Taiwan shall be the most precious one, which is viewed as the first to own the Chinese Buddhist Canon in the Buddhism society of Taiwan. On both sides of the Shrine in the Main Hall, the temple logos of Eihei-ji Temple and Soji-ji Temple of Japan can be seen, they were done due to avoid the destruction of the Temple during Japanization movement during Japanese colonization period by acknowledging Eihei-ji Temple of Japan as the religious leader, which are the vivid evidence that witnessed the history era of Taiwan under Japanese ruling. 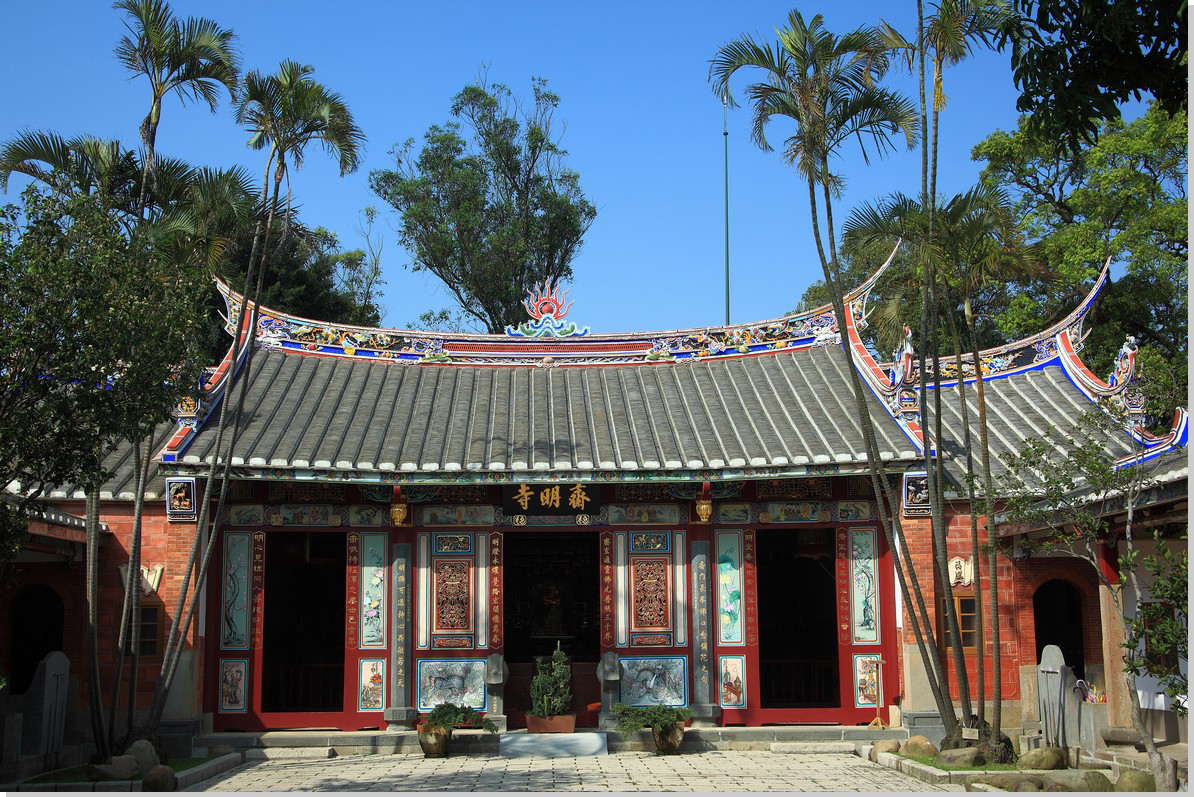 In the 30th year of Daoguang Emperor of Qing Dynasty (1850), Li, A-jia, the religious worshipper from Daxi, became a monk from the Fa-yu Temple of Mount Putuo in Nanahai, China. He then was initiated into monkhood at the Jie-tsao Hut near Daxi and named the Hut as Fu-fen Temple and worshiped the Guanyin he invited from Nanahai. In the 12th year of Tongzhi Emperor of Qing Dynasty (1873), the Temple Abbot Huang, Pu-se (dates of birth and death unknown) managed to raise funds to reconstruct the Temple with the local gentries, and renamed it “Zhai-ming Hall”, which was affiliated to the Long-hua school from the Chinese religions of fasting (one of the Taiwanese folklore religious beliefs, also known as the Household Buddhism which combined the philosophy of Confucianism, Taoism and part of Buddhism). The both wings and the Main Hall of the Temple were extended in the 1st year of Taisho era of Japanese colonization period (1912), and the Columbarium Pagoda was constructed behind the Temple for people to place and worship the remains of their ancestors. “The sunset and the Pagoda” has become one of the scenery of the 8 scenery and 12 attractions of Daxi. In 1999, Dharma Drum Mountain took the management of the Temple and constructed meditation rooms, dorms and fasting halls. Due to Zhai-ming Monastery is the major temple of Long-hua school and its unique construction style, it has been categorized as the Taoyuan City Government designated historical spot.

Originally, Daxi Zhai-ming Monastery was a sangheyuan temple building with the layout of single entry and double protecting dragons (“C” shape), later it was extended to the formation of single entry and quad protecting dragons, in front of the east and west wings the Japanese light baskets are placed and the one on the right side was placed during the Showa era. The Main Hall adopted the traditional Minnan style with its artistic decorations and pillars structure. The Main Hall and the protecting dragons of both wings formed the layout of sangheyuan which are connected by mortise and tenon that portray the beauty of Chinese wooden buildings. 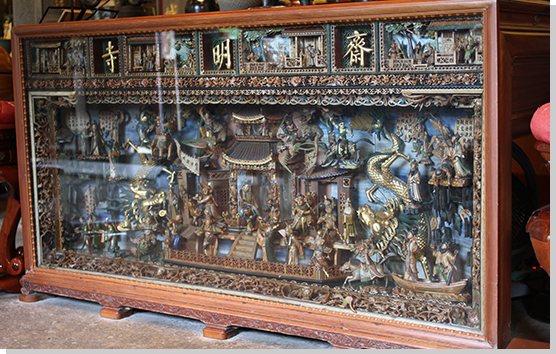 B.The Wooden Divine Table Illustrating the Story of “Emperor Xuanzong of Tang Traveling to Lunar Guanghan Palace at Night” Made by Huang, Gue-li:

The divine table at the front of the Main Hall is the rare handmade wooden divine table work made by wood sculptor master Huang, Gue-li (1903-1995), the Tble is made out of an overall piece of boxwood three-dimensionally, at the front side the story of “Emperor Xuanzong of Tang Traveling to Lunar Guanghan Palace at Night” is carved for portraying, the figures are well-made and vivid, which is the most valuable antiques in the Temple. 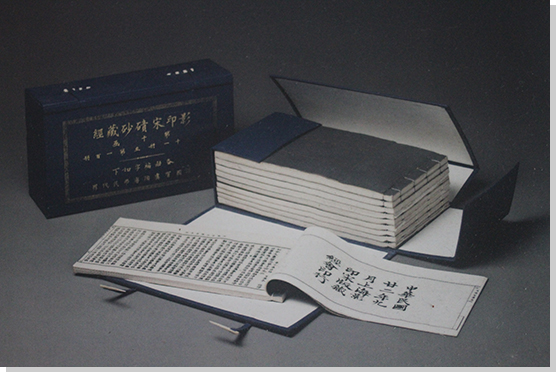 C.The Only Copy of“Chinese Buddhist Canon” from the Song Dynasty in Taiwan:

The Japanization movement initiated by Japanese colonizers during Pacific War period was equipped with the intention to eliminate the original religions of Taiwan, and Zhai-ming Monastery was the affiliated to Soto School, so it acknowledged the Echizen Eihei-ji Temple in Japan as the leader to avoid being eliminated. On the left side of the Buddha figures is the temple logo of Eiheiji Temple of Soto School in Fukui Prefecture, Japan (also known as “Kugaringtou” logo), on the right side is the temple logo of Soji-ji Temple of Soto School in Yokohama, Japan (also known as “Goshichinokiri” logo), which are the vivid evidence that witnessed the history era of Taiwan under Japanese ruling. 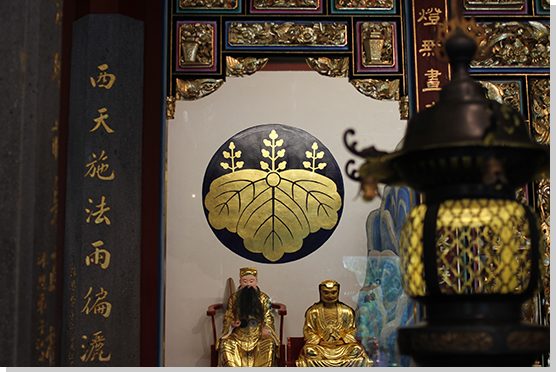 E.The Winner of the Champion of Taiwan Architecture Award of 2012- The Extension of Daxi Zhai-ming Monastery:

The construction of meditation rooms, dorms and fasting halls of Daxi Zhai-ming Monastery adopted the approach “reduction” construction by the designer Sun, Te-hung who portrayed the concept of “religious practicing” that reduce the original designing concept, including styles, altitude, and coloring etc. as much as possible; and express the serenity atmosphere of religious architecture via the surface of fair-faced concrete. Such design had preserved the simple format and finally won the Champion of Taiwan Architecture Award of 2012. 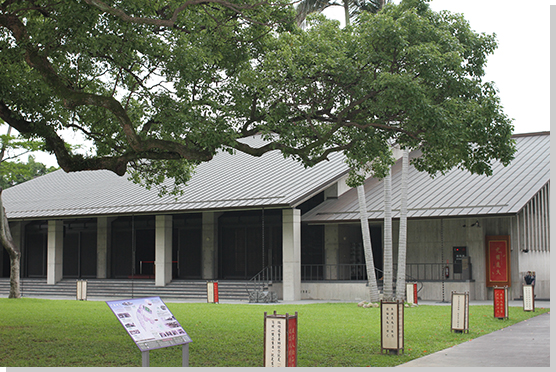 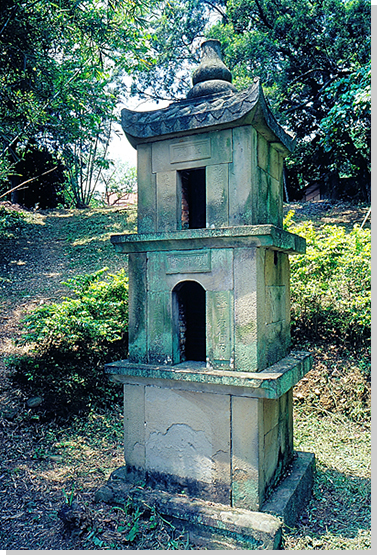 The words respect pavilion was built roughly in the 5th year of Tongzhi Emperor of Qing Dynasty (1866), which is the oldest existing art work in Taoyuan City. It was made of sandstone materials extracted from the nearby areas, the body of the Pavilion is divided into three levels and are built by stone bars. The top level is used for worshiping, the rooftop of the Pavilion is built in the shape of gourd and enshrines the Memorial Tablet of Cangjie, the inventor of Chinese characters. There are couplets at the middle and top levels, and the middle level is used for words incineration, and the bottom level is used for ventilation and storing written words. The Pavilion is built in good structural ratio and preserved well, which is viewed as the precious cultural asset.

The application in advance is required for conducting photography in Daxi Zhai-ming Monastery, the ancient trail near the Monastery would be filled with the flourish of tung blossoms in May of each year, which is the popular attraction spot for tourists to appreciate the flowers.

Open Dates:24/7 for the whole year for the guidance