1.The Shoushanyan Guanyin Temple- One of the rare temples in Taiwan named by the Chinese Emperor

The Shoushanyan Guanyin Temple is the Taoyuan City Government designated historical spot which is famous for its sculpture decorations such as wooden, stone, painted and clay sculptures. The artistic themes for wooden sculptures include flowers, birds, animals, mascots and figures which adopted the symmetrical layouts. Most works are done under the coordination of the art master Chen, Yin-bing (1864-1944), who adopts technics from Zhangzhou, in the 4th year of Taisho era of Japanese colonization period (1915). The stone and wooden sculptures are done in careful and professional approach, and based on the concept of Chi Tiger- the Chinese ancient sacred beast, the “Dougong” that supports the weight of the structures (in other terms, it applies the principle of lever to support the weight of eaves while in pursuit of the balance design)is designed beautifully. The refurbish of koji pottery and ceramics cutting and pasting on the temple’s roof top was conducted in 1963 by master Chen, Tian-chi (1906-1991) which is the must-see feature. 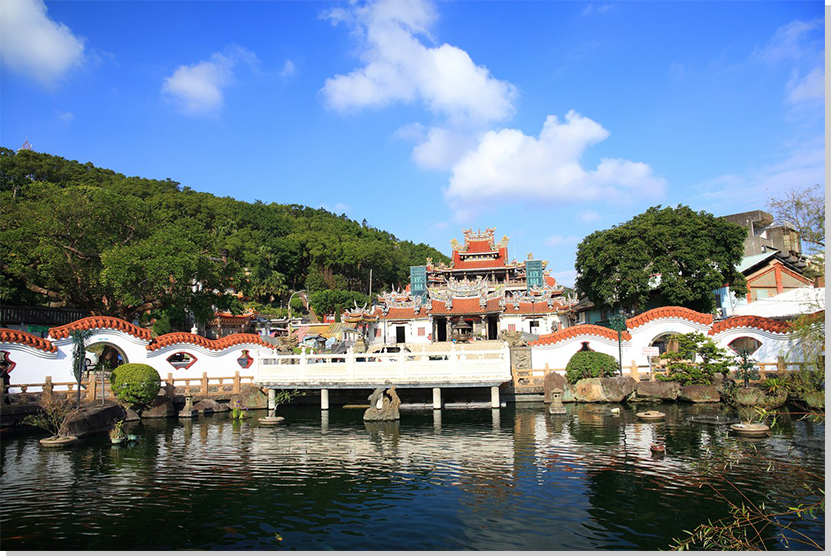 The Shoushanyan Guanyin Temple is also known as “Guanyinma Temple of the Lin-ding” and was first constructed in the 7th year of Qianlong era of the Qing Dynasty (1742). Master Shunji from Chia-yin, Guangdong invited the divine sculpture of Guanyin from Chao-yin Temple of Mount Putuo and crossed the Strait to come ashore to the shade of the Banyan tree in Lin-ding Village in Taiwan. It was said that the spirit of Guanyin wished to establish a temple in the exact place via dreaming expression, therefore the local residents placed the sculpture in Lin-ding and in the 28th year of Qianlong era of the Qing Dynasty (1763), started to construct a cottage to worship Guanyin. In the 58th year of Qianlong era of the Qing Dynasty (1793), Ha-dana (unknown-1799), the Navy Admiral of Fujian and the Army General of Taiwan came past such location on the southward way to wipe out the bandits and made a wish to the divine spirit that if he can eliminate the bandits, he would construct a Buddhist temple in return. His wish finally came true and the local gentries were invited to fund the construction of “The Shoushanyan Guanyin Temple”. The major refurnish in the 4th year of Taisho era of Japanese colonization period (1915) was coordinated by the art master Chen, Yin-bing, which set the various artistic decorations feature of the Temple, and after more than 200 years of progress, the Temple has already become one of the belief centers of residents of Taoyuan and New Taipei City. 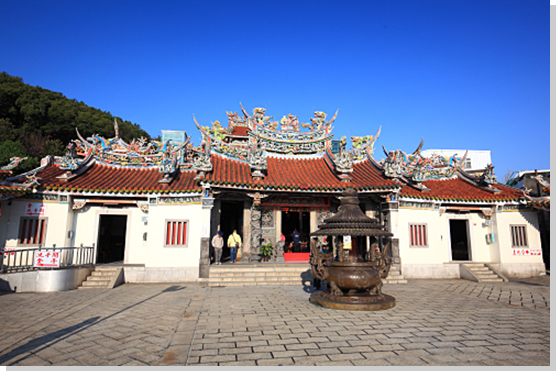 A.Layouts of the Front and Main Hall Construction：

The Shoushanyan Guanyin Temple is a temple with two entries and two protecting dragons (two entries to be passed in order to reach into the building, and protecting dragon means the right and left wings of the traditional Chinese sanheyuan or siheyuan), the Front and Main Hall with three open rooms applied the construction style in the 4th year of Taisho era of Japanese colonization period (1915). The dragon stone pillars in the front corridor were sculpted out of Andesite with the major feature of the curve-shaped dragons being at the interior side instead of the front. The Main Hall is the space for worshiping, the extended frameworks as well as the simple and prudent decorations all illustrate the solemn atmosphere. The stone dragon pillars at the Gate Hall and Main Hall are presented in the form of stone carving: semi-relief style for most of the figures, shallow relief for flowers and birds, and the most vivid scheme relief style for animals.

B.The Plaque of “Helping the Majority with Mercy” by Ha-dana: 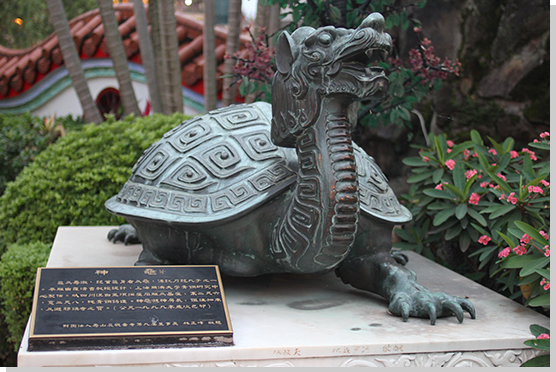 C.Mascot of the Temple- The God Turtle and The Divine Crane:

The God Turtle and The Divine Crane in in the garden of Shoushanyan are the mascots of the temple. Especially for the God Turtle, with the body of a turtle and head of a dragon, it was said to be the Chinese ancient sacred beast representing the concept of longevity. 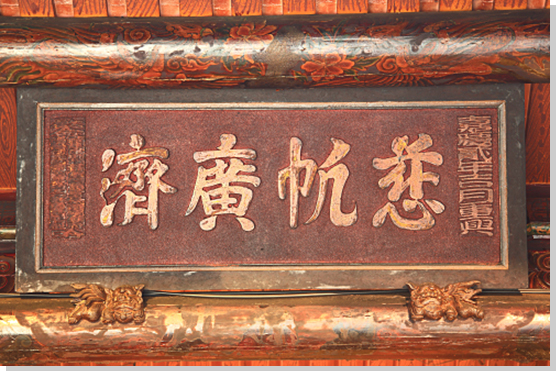 There is a gorgeous artificial “Locus Pond” at the front of Shoushanyan with bridges, rockery, waterfalls that portraying the garden scenery in the Southern China with the Koi swimming happily in the water and the willows swinging gently in the breeze, presenting a poetic scene. 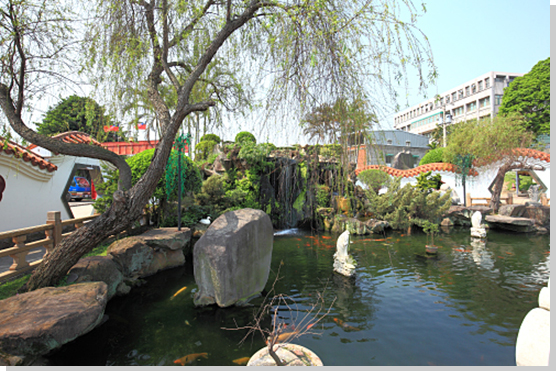 Foundation of The Shoushanyan Guanyin Temple of Taoyuan County, Taiwan