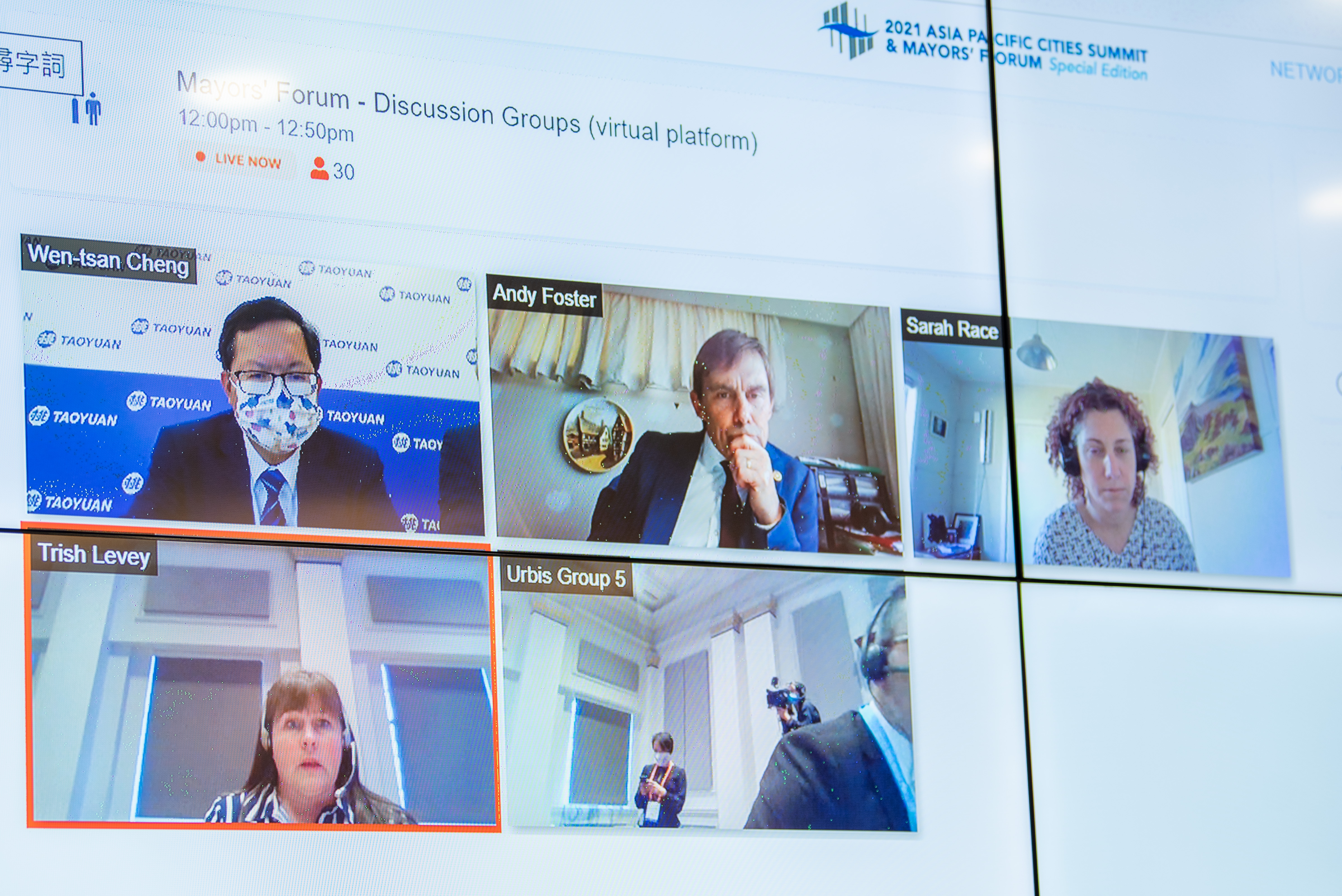 On September 8th, Taoyuan City Mayor Cheng Wen-Tsan participated in the 2021 APCS Asia Pacific Cities Summit in Brisbane, Australia. Based on the theme of “Rebuilding Cities through Opportunities and Challenges,” he shared his experiences in building a sustainable city, green transportation, and smart governance with more than 30 heads of cities in the Asian Pacific.

The Summit has moved into its 13th year, attracting more than 130 city representatives to participate in the grand event every year, and it has matured into one of the most important forums for exchange between cities around the globe. Due to the pandemic, this year the Summit combined virtual and physical methods of participation. 74 cities from New Zealand, the United Kingdom, Japan, South Korea, China, Singapore, Indonesia, and other countries were invited to the event, targeting themes such as “healthy cities,” “energetic cities,” “connected cities,” and “smart cities,” as well as sharing opportunities and challenges encountered in urban governance in the post-epidemic era.

In today's (September 8th) summit, Mayor Cheng met with the Mayor of Wellington, New Zealand, Andy Foster, and the Deputy Mayor of the Mornington Peninsula in Victoria, Australia, Sarah Race, to exchange challenges and experience in urban governance.

Mayor Cheng explained that Taoyuan is a fast-growing city with a relatively big population of young people. Within his 7 years of serving as mayor, the total population of Taoyuan City has increased by 220,000 people, creating many needs for urban governance in transportation infrastructure, urban planning, industrial environment, and more. Taoyuan focuses on circular economy SDGs as development goals, publishing a Voluntary Review Report (VLR) as an important measure of governance progress. Regarding public services, Taoyuan has also built many types of social welfare centers such as social housing and public kindergartens to meet the needs of different age populations. The construction of public transportation lines is also a key project within current development plans: Through the construction of new MRT and railway networks, new towns can be developed along these networks, allowing the population to be distributed to formerly less populated areas and stabilize overall housing prices.

Mayor Cheng mentioned that with 12,000 factories, Taoyuan has a high density of industrial facilities, and a waste recycling plan is also one of the city's main policies. Regarding the promotion of low-carbon policies, Taoyuan currently has three main electric motorcycle manufacturers, and the growth rate of electric motorcycle usage rates ranks first in Taiwan. Orderly, smart governance is solidly implemented through circular economy low-carbon policies.

Finally, Mayor Cheng was invited to give a speech on the topic of “Connected Cities – Redefining connections and movement” on September 10th in a pre-recorded video format, sharing Taoyuan City's experience in promoting low-carbon policies in ecological logistics and green transportation, as well as future plans regarding the Taoyuan Aerotropolis Project.

The Summit has moved into its 13th year, this year the Summit combined virtual and physical methods of participation.

Based on the theme of “Rebuilding Cities through Opportunities and Challenges,” Mayor Cheng Wen-Tsan shared his experiences in building a sustainable city, green transportation, and smart governance