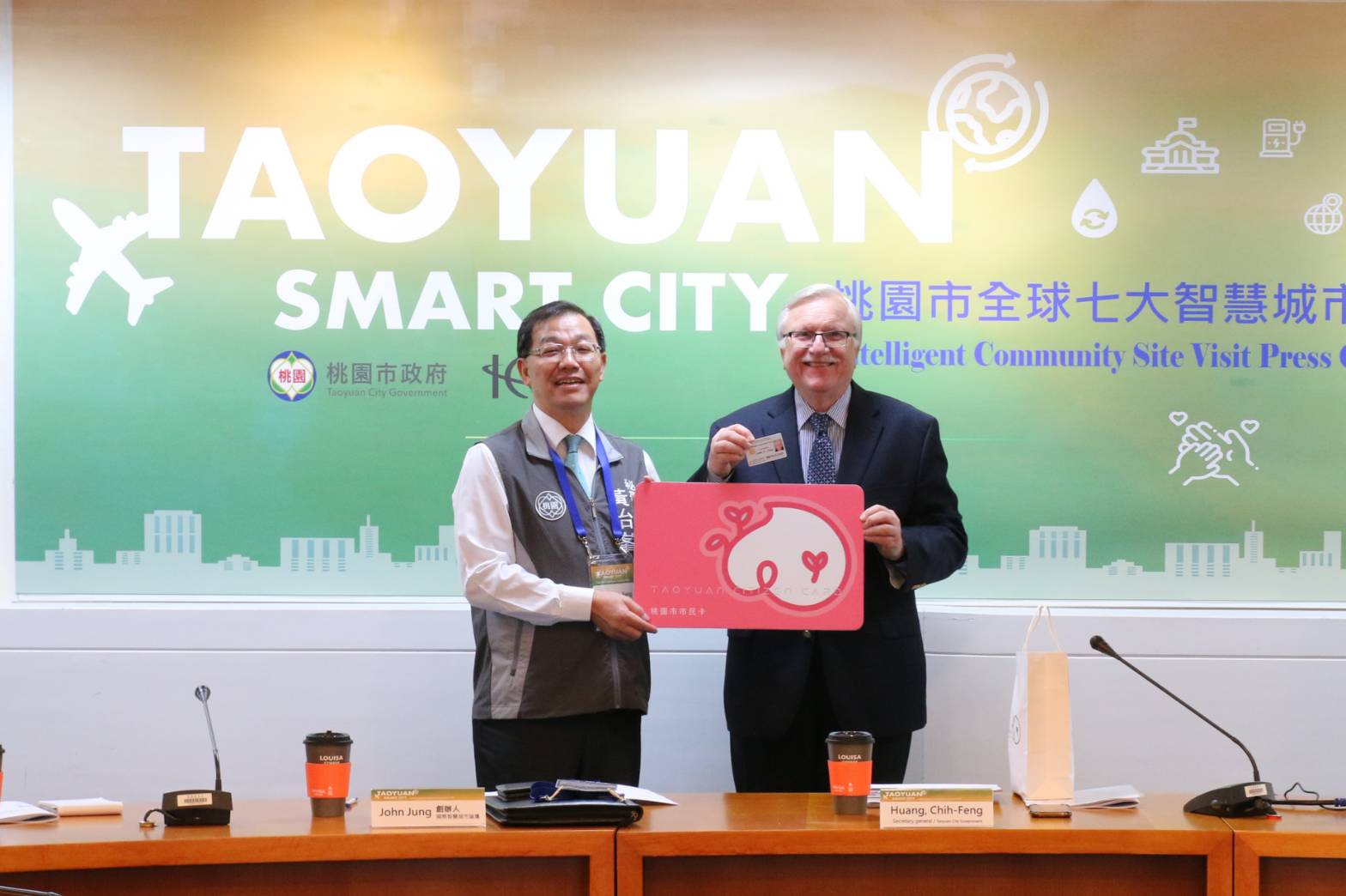 Intelligent Community Forum (ICF) announced the "2019 Top 7 Intelligent Communities" on February 11, 2019 (US East Coast Time) at the Laval University in Quebec, Canada. Taoyuan city was once again selected as one of the top 7 communities globally. In order to conduct a further evaluation and verification, the co-founder of ICF, John G. Jung, had arrived in Taoyuan on April 29 for a two-day site visit tour.

Along the 30-year-history of ICF, the international organization has been known for its objective evaluation for local communities to determine their competitiveness in digital economy according to six indicators: broadband, knowledge workforce, innovation, Sustainability, Advocacy and digital equality.

In the broadband indicator, the accessibility of digital environment for citizens is essential. Taoyuan is known for its ubiquitous network services with high city wide coverage.

With regard to the innovation indicator, the city government is planning to open up several public spaces across the city to be used as test beds for innovative governance, such as the Innovation & Development Talent Exchange Center of Asia X Silicon Valley project and several startup bases. Moreover, the "Single-Stop service center" combined various public services required for business initiation in one place can greatly facilitate entrepreneurship and attract global firms to invigorate local industry. Moreover, the Taoyuan Citizen Card(TCC) which was initially launched in the year of 2015, with more than 1.3 million units of issuance. In the year of 2018, the civic participatory model had been adopted in the TCC functionality expansion initiative. By collecting and synthesizing public opinions into 14 proposals, a public vote was held to determine the next step of TCC expansion project.

As for digital equality, the city government has been holding various kind of digital training courses with disparate target groups, such as remote rural residents, elderly, disabled and new immigrants... etc. The aim is to bridge the urban-rural gap in the digital era, create infinite learning environment and enhance the overall competitiveness of general population in Taoyuan.

Regarding the advocacy indicator, Taoyuan city government has been actively holding various kind of exhibitions and contests. From activities with local features such as Taoyuan Agricultural Expo, Land Art Festival, Lunggang Rice Noodles Festival, Taoyuan Flower Festival and Governmental Open Data Contest. To the participation of global scale activities such as Taipei Smart City Summit & Expo, GO Smart city competition and Intelligent Community Forum programs. Taoyuan is pursuing its global exposure in a proactive manner in a bid to create an international linkage between public, private and academic sectors around the world. The aim is not only the attraction of talent, but to learn successful governmental experiences from others and apply onto its local community.

And finally in the sustainability indicator, the city government has been dedicating considerable effort and resources in solar/wind energy harvesting technologies with the aim of building a low-carbon green city. The policy is not only focusing on the reduction of carbon dioxide emission, but inculcating general public with the energy conservation concept from the grass root level.

The Taoyuan delegation lead by Jimmy Chiou, deputy secretary general, will arrive at New York city of the U.S. in this June for the ICF 2019 Summit to receive the Top 7 award, and hopefully to be selected as the intelligent community of the year.